This weekend the Integrum team decided to participate in Chandler Startup Weekend. Startup Weekends are weekend-long, hands-on experiences where entrepreneurs and aspiring entrepreneurs can find out if startup ideas are viable. Teams focus on customer development, validating their ideas, practicing LEAN Startup Methodologies and building a minimal viable product.

As a team we decided it would be a fun way to spend some time together and challenge our abilities. We told ourselves that we would either join a pitched idea and work as the development team or we would play with an idea of our own and deliver the product. Either way we wanted something that could be done within the short time we had together while leaving no pressure to continue past the weekend. We also knew we were slightly handicapped because we would NOT be working on Sunday.

The Wednesday before Startup Weekend we spent a fifteen minute time box on brainstorming some ideas. Here is the list we came up with: 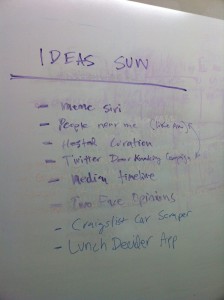 Friday night we showed up ready to jump right in to something. We got some dinner from Pittsburgh Willy‘s and then started listening to pitches. As the pitches were winding down we decided to keep it just our team because we would not be around on Sunday and to go with the Craigslist Car Scraper. At this point it was about 8pm and we found a room and got started.

We started out by doing a quick Agile Lift Off. This process took us about 30 minutes. 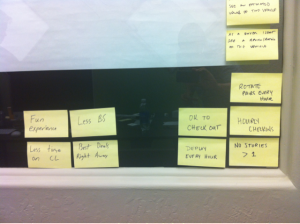 We then did a quick story workshop in about 30 minutes to generate a backlog of stories.  After creating the backlog we sorted it and started planning. It quickly became apparent that at no stories larger than 1 hour, that 1 hour sprints probably made sense. When breaking down tasks we made our smallest time box 6 minutes or 0.1 hours. Most tasks were either .1 or .2. We setup two clocks, one to measure iteration time (1 hour) and one to notify of time box (6 minute).

At the end of every sprint we would do a Core Protocol Checkin and then do a quick retrospective. After the retrospective we would take a break and play some NFL Blitz. Then right back into another planning (generally about 10 minutes).

This is what we produced http://hooptie.co

One thought on “An Agile Teams Lessons Learned from Startup Weekend”

Step up to the mic. Cancel reply

Get inspired with an Agile Weekly Podcast

Derek, Clayton and Chris slowly remember what they were talking about… Oh ya! Culture Fit! Including mono-cultures, hiring, diversity of ideas and behaviors enforcing culture.